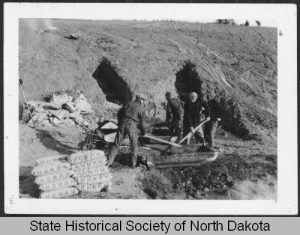 In April of 1933, President Franklin D. Roosevelt created the Civilian Conservation Corps (CCC) to put thousands of unemployed men to work on environmental conservation projects. Within three months, 300,000 men had enrolled, making the CCC the most rapid and massive peacetime mobilization in the country’s history. At its peak in August of 1935, the CCC had 500,000 enrolled men working on conservation projects all across the country.

In 1934, the CCC Company 794 from Lincoln, ND arrived at the site of the International Peace Garden to begin the first major phase of construction. After building their barracks, they set to work clearing brush and building roads, bridges, trails, picnic shelters, and open air fireplaces. 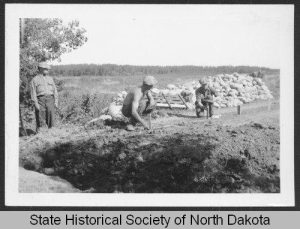 The CCC worked with engineers and architects from the National Parks Service on the design of the earliest structures in the IPG, including the historic lodge. The wood and stone used for the structure embody the emphasis on local materials and the friendship between nations. Built from timber from Riding Mountain in Manitoba and granite from the Turtle Mountains in North Dakota, the lodge is 105 feet long with a 60 foot wing and features two massive stone fireplaces.

From 1934 to 1941, CCC crews numbering from 150 to 200 men built additional structures and features, including workshops, a plant nursery, tourist cabins, and a 2,000 seat amphitheater situated in a natural bowl. They also built a dam and an artificial lake that was later named Lake Udall to honor W.V. Udall, editor of the Boissevain Recorder, in recognition of his support for the creation and development of the IPG. 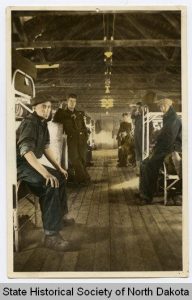 In 1941, the work of the CCC was halted by the start of WWII. Modern-day visitors can see the fruits of their labor in the layout of the IPG, its original roads and trails, and its historic structures that are still in use today.

Nestled in the Turtle Mountains is a garden. A celebration of peace, a living monument to the ideals of friendship and cooperation among nations. Acres of uninterrupted prairie, forest and radiant floral gardens defined by nature, not borders. Join the International Peace Garden in Celebrating 90 Years through Music and the Arts. www.peacegarden.com